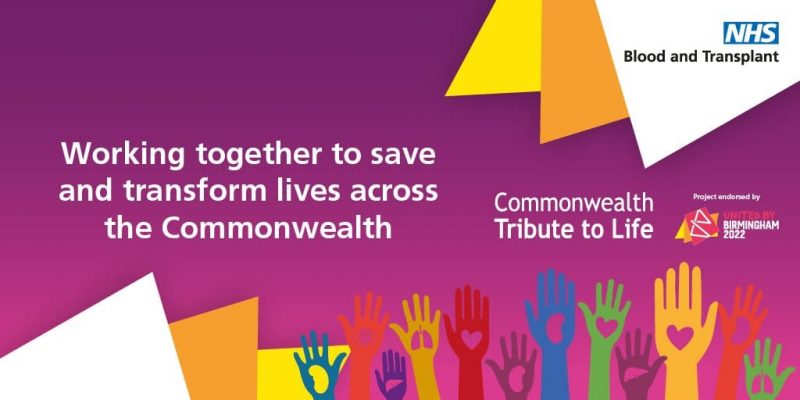 The Commonwealth Tribute to Life Project is the culmination of three years of work and represents a major step towards achieving health equality in both the UK and the Commonwealth.

This project provides a framework for sharing knowledge and expertise to increase ethical organ donation and transplantation. It seeks to promote equality in health for the benefit of all citizens of the Commonwealth.

The countries are committing to sign a memorandum of understanding which will come into effect at the start of the Commonwealth Games in Birmingham in 2022, with 42 of the 54 countries having committed so far.

Today, participants from across the Commonwealth are holding a virtual launch event with the official launch by the Secretary of State for Health and Social Care, MP Sajid Javid.

An official legacy project of the Birmingham 2022 Commonwealth Games and part of the United by Birmingham 2022 Games community programme, Tribute to Life presents a unique opportunity to increase levels of organ and tissue donation and transplantation in the world.

The World Health Organization’s Global Observatory on Donation and Transplantation estimates that there were more than 146,000 organs transplanted in 2018 worldwide. This gift of life came from the generosity of more than 40,000 living donors and nearly 39,000 deceased organ donors.

However, the donation rate varies from zero donors in some Commonwealth countries to over 20 per million population in countries such as Australia, Canada, Malta and the United Kingdom.

Levels of organ failure and the need for transplantation remain high in all countries. These unmet needs can lead to the death of those on the transplant waiting list, commercial “transplant tourism” or, unfortunately, even organ trafficking to the detriment of organ donors and recipients. .

Tribute to Life signatories will collaborate by sharing:

In the UK, 6,230 people are waiting for an organ transplant, of which 1,934 are from a black, Asian, mixed-race or other ethnic minority background, accounting for around 32% of the transplant list.

The Secretary of State for Health and Social Care, MP Sajid Javid, officially launched the project. He said:

The Commonwealth Tribute to Life is the culmination of three years of dedicated work by NHS Blood and Transplant, Dr Dale Gardiner and Dr Satya Sharma MBE DL and I am delighted to launch this initiative.

By sharing knowledge and awareness of organ and tissue donation and transplantation, Commonwealth countries can work together to save and transform the lives of thousands of patients.

As part of this, we want people from all communities, but especially those from ethnic minorities, to discuss organ donation and make the vital choice to become a donor.

Dr Satya Sharma MBE, Deputy Lord Lieutenant of the West Midlands, chaired the project and hailed its success when it launched. He said:

The 2022 Commonwealth Games is committed to bringing people together and celebrating the diversity of the West Midlands and the Commonwealth.

As the world comes together, we will show the importance of organ and tissue donation. This Memorandum of Understanding can save and improve lives around the world. For those of you in the UK, we need you to speak to your family and tell them your decision about organ donation – let them know for sure.

The MoU will come into effect just before the start of the Commonwealth Games in July 2022.