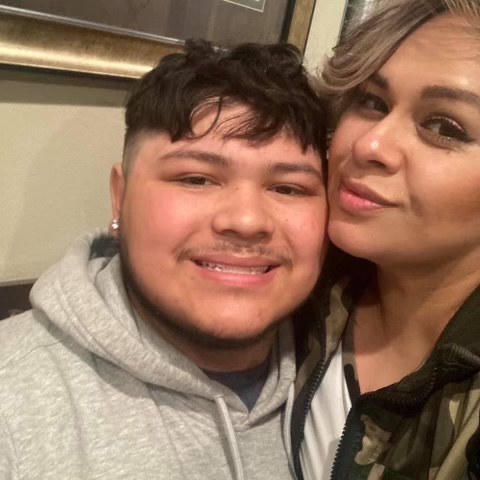 Brenda Stahl remembers her third child as different from her other three sons.

Issac Trevino was more outspoken and loving than others, strong-willed and a quick learner, she says. When he was born in 2003, “he just changed everything”.

And when Trevino died on March 17, he changed the life of another.

His health improved in October and Trevino renewed his driver’s license – posing for a new photo still with a full head of hair – and volunteered to be an organ and tissue donor. A month later, tests showed the aspiring electrician to be cancer-free.

Then, on Christmas Eve, Trevino lost feeling in his legs and couldn’t stand or walk. His mother rushed him to the hospital, where surgeons removed a brain tumor.

Stahl eventually took him home to recuperate. “I’m all they got, they’re all I got, and I won’t let my son go to rehab [hospital],” she says.

But by the end of February, Trevino was back in hospital, bleeding and in pain. Another tumor was found and he had developed pneumonia.

“’I don’t want to do it again. Don’t bring me back if anything should happen,” Stahl said, repeating her son’s words to her as doctors put him on a ventilator. He agreed to give her three days, she said. Trevino died the same day.

But weeks before, the young man had gathered his family in his room and told them that if he died he wanted to donate his organs and that he wanted to be cremated, with his ashes scattered on the beach. He wanted a family barbecue rather than a funeral.

“He wasn’t angry. He never wondered why,” Stahl said. “He said if [his experience] helped only one person, it was worth it.

After his death, Trevino’s corneas were recovered to restore sight to another person. Because of his cancer, other organs could not be transplanted. Stahl had made sure the hospital was aware of her son’s wishes and his decision to be an organ donor.

She cries at the memory but is determined to share her son’s story so others can become organ donors.

Connie Thigpen, nurse director of Baptist Medical Center in downtown San Antonio, said Trevino’s actions, and those of others like him who register as organ donors, relieve their families of grief and additional stress that arises after the death of a loved one.

And “most of the time the family will honor their loved one’s wishes,” Thigpen said.

The most common way to register as an organ donor is when obtaining or renewing a driver’s license, as Trevino did.

Texas residents can also register online at Donate Life Texas, one of the state’s three organ procurement organizations, or when purchasing a hunting or fishing license, said Clarissa Thompson, spokesperson for the Texas Organ Sharing Alliance. Then inform your family members.

“We always say to share your ‘why’ with your family,” Thompson said. “When you do this, it helps speed up this process and can take the burden off the family of having to say yes or no” to organ donation.

Alliance polls show that 9 out of 10 people support donation, but when someone has to make this decision for a loved one, they are less likely to give consent.

One organ donor can save up to eight lives, and 75 people can have their quality of life significantly improved with donated tissue or corneas, according to the alliance. In the United States, approximately 110,000 men, women and children are waiting for life-saving organ transplants and 20 people die every day while waiting.

More than half of the national waiting list is made up of people from ethnic groups with higher rates of diabetes and hypertension, diseases that damage the kidneys. Although the organs do not match race or ethnicity, transplants are generally more successful if the donor and recipient have similar genetics.

In Texas, there are 10,000 people on the organ transplant waiting list, 8,000 of whom need a new kidney. Alliance data shows that about 40% of them are Hispanic.

Although the pandemic has impacted many aspects of medicine and health care, it has not significantly affected organ donation, Thompson said.

COVID-positive patients at death cannot be organ donors. But because the Center for Life organ recovery site opened at University Hospital in 2018, the organization has its own operating rooms, staff and equipment for organ recovery and doesn’t rely solely on local hospitals, which makes the organ procurement process more efficient, Thompson said. .

San Antonio Hospital Systems helps by contacting the Organ Procurement Group whenever nurses and doctors think their patient might serve as a potential donor or is a registered donor. Hospitals like Baptist are also working to encourage donor registrations.

“When you work [in the intensive care unit and the emergency department] like me, you see so many bad things,” Thigpen said.

But knowing there’s an opportunity to help someone else, she says, “that’s definitely a key part of healing, and your loved one never left because they were gone. gave life to another”.