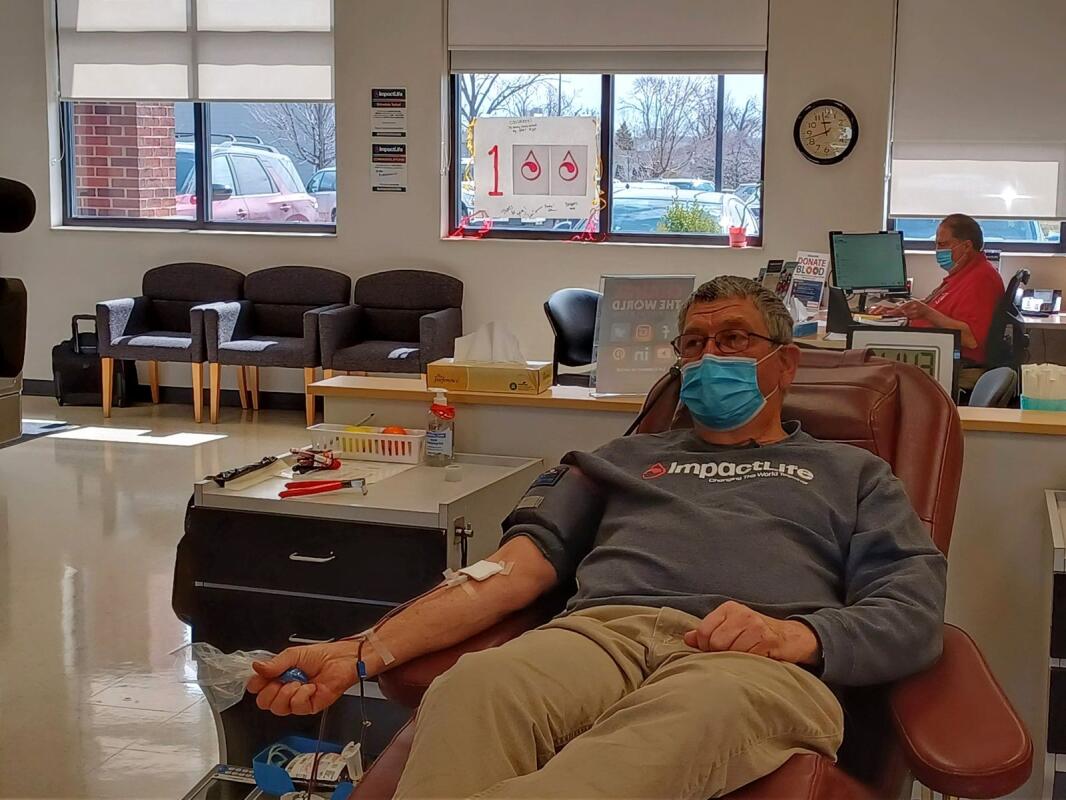 Rich Patterson makes his 100th donation to ImpactLife in Cedar Rapids. He is one of the top 3% blood donors in the organization. (Submitted)

CEDAR RAPIDS – ImpactLife celebrates a donor who has reached 100 whole blood donations – a milestone that places him in the top 3% of all active blood donors.

The streak began in 1978 for 72-year-old Rich Patterson of Cedar Rapids when he donated blood at Mercy Medical Center and then at Mississippi Valley Regional Blood Center, now known as ImpactLife. It wasn’t his first donation, which he made as a student in the ’60s, but it was the first that started a trend for Patterson.

As a whole blood donor, Patterson was able to donate every 56 days, up to six times a year.

Patterson, who is also a freelance columnist for The Gazette, didn’t start out as a dedicated donor, he said, when he started giving occasionally.

“Then it became a habit. I learned that every time I donate blood, it can help up to three people,” he said. “In theory, it saves people’s lives. and that seemed pretty good, so I got into giving as often as I could.”

“It didn’t feel right” not to donate, Patterson said.

But as director of the Indian Creek Nature Center for 36 years from 1978 to 2014, the little habit was an easy way to give back to his busy schedule. Working for a nonprofit that relied on volunteers, Patterson knows the value of volunteerism at a time when it has been in decline for decades.

“Donating blood is a form of volunteering, and it doesn’t take too long,” he said. “In my life, I have always volunteered in different places – volunteering is essential.”

“All products and types of donations are greatly needed, so we appreciate the dedication of frequent donors of whole blood, platelets, plasma and double red blood cells,” said Kirby Winn, public relations manager for ImpactLife. “Having (100) donations over so many years certainly represents a high level of commitment to our mission for a long time.”

Through May 15, ImpactLife is partnering with the National Forest Foundation to plant thousands of trees. Through his Give Back and Go Green initiative, blood donors can help blood banks and nature like Patterson has done for so many years.

Every blood donor participating in the program has the opportunity to have a tree planted in a US national forest, saving lives and supporting reforestation at the same time. All donors in attendance will receive a voucher to redeem for a gift card up to $25 and a tree to plant in their name.

Based on current estimates, ImpactLife expects 20,000 trees to be planted through this promotion, advancing a campaign launched by the National Forest Foundation in 2018 to plant 50 million trees.

To learn more about donating blood or scheduling an appointment, visit bloodcenter.org/donate or call (800) 747-5401.