Cambridge, N.S., blood donor Steve Connors has no plans to slow down

BERWICK, NS — Steve Connors has been rolling up his sleeves for almost 40 years.

He is a dedicated donor who helps Canadian Blood Services maintain its supply to help those in need across the country.

“I like helping out and saving a few lives in the process, that’s the main reason,” Connors said. “And you feel good doing it.”

He recently made his 123rd donation, but is modest about the achievement.

“There are a lot more people here who have donated more,” the 58-year-old Cambridge resident said in the lobby of Kings Mutual Century Center before heading to the Berwick and District Lions Club to do the recent donation. 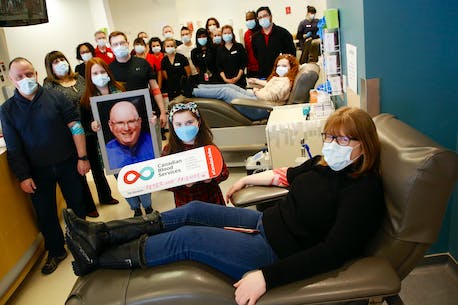 Connors was attending community college at the Kingstec Campus in Kentville when he first decided to donate to the Kentville Fire Station.

While he took a few years off, he is now a regular. He is allowed to donate blood every 56 days and estimates that he averages about five donations a year.

Kathy Gracie, Canadian Blood Services’ assistant regional director of donor relations for Atlantic Canada, said it was fortunate to have a strong group of committed donors.

“It’s very moving to see that they really put a lot of time into donating blood and the effects it has on so many patients,” she said. “There are not enough thanks you can give to someone who dedicates so much time to donating blood. It is very moving.

The Coldbrook resident received a liver transplant in December 2012 and said blood was needed during these types of surgeries. He is grateful to Connors, and others like him, for dedicating so much of their time to donating blood.

“He’s a hero as far as I’m concerned,” King said. “It would be scary to know how many people he saved.”

Some information about blood donation:

Connors sees a lot of familiar faces every time he donates as there is a committed group of people who regularly attend local clinics.

For a long time, one such person was Frank Woodworth, an active Berwick resident and teacher at Central Kings Rural High School, who organized the blood donation clinics.

Connors and Woodworth became friends and donated together. Woodworth died in 2013 of leukemia. He had given blood 95 times.

“And it’s often used in emergency situations… when you don’t have time to determine a person’s blood type,” Gracie explained. “That’s why we call it the Golden Blood. It can be given to anyone.

As of March 22, there was only a five-day supply for O-negative, O-positive and B-negative blood types. Gracie said they would like to have more than a seven-day supply. There was a 16 day supply for AB positive.

She said wintry weather can force clinics to be canceled and the spike in COVID-19 cases earlier this year compounded the problem as people with the virus had to self-isolate and could not visit. at clinics.

The organization appealed to donors and people responded.

“We are still trying to replenish our blood supply,” she said. “We need people to donate several times a year to keep this inventory healthy.”

Gracie said many of her regular donors are over 40 and try to involve younger people. They typically see good turnouts at college events, but the key is to keep them donating after graduation.

Gracie said one in two Canadians is eligible to donate blood, plasma or platelets, but only one in 81 donates.

“We would obviously like to see that number increase,” she said.

And as summer approaches, the needs are great because donations generally decrease during the holiday period when the needs increase. The organization is bracing for the potential of even fewer donors this summer with the potential for more people to decide to travel with the easing of pandemic restrictions.

“I really anticipate the summer to be tough,” Gracie said, noting that demand typically increases during this time of year. “The craving for blood doesn’t take this vacation, doesn’t take a vacation, it’s constant.”

One person Canadian Blood Services can count on is Connors, who has no intention of slowing down.

“It’s just something I want to keep doing.”

Jason Malloy is the editor of the Annapolis Valley Register. He can be contacted by email at [email protected] and followed on Twitter at @JasonMa47772994.

The DGR rewarded its biggest donors in 2021 with Triumph bikes