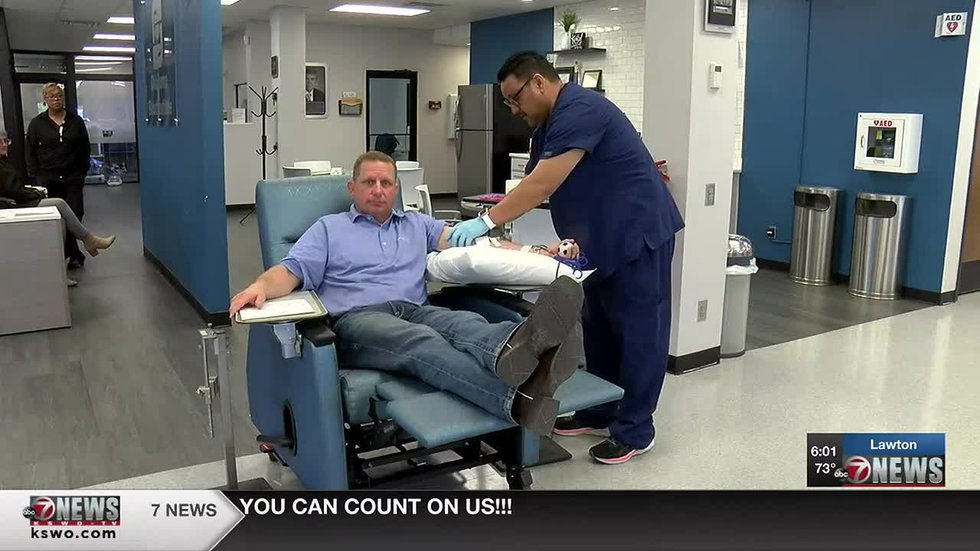 LAWTON, Okla. (KSWO) – A man has gone from a survivor to a lifelong blood donor, after the Oklahoma Blood Institute helped save his life in 2019.

Now he wants others to join him on his journey to save lives.

Erick Chandler has been riding a horse since he was young, so never in a million years would he have thought he would almost lose his life riding one.

He was working cattle while riding a horse, when the traumatic accident happened.

“My horse came back on top of me and my saddle horn impaled my inner thigh,” Chandler said. “So when the saddle horn went into my thigh, it tore my muscle, my femoral artery and my femoral nerve, which basically made me bleed.”

His stepfather called 911, he was airlifted to OU Medical in Oklahoma City, on the way he was given 6 pints of O negative blood to sustain him.

In 2016, the Oklahoma Blood Institute started an initiative to replace saline bags with blood bags in medical helicopters, which will help someone with significant blood loss.

Chandler said if his accident had happened before the switch, he wouldn’t be here today to tell his story.

“I lay in the pasture for 45 minutes bleeding, I flew in a helicopter for 30 minutes. so an hour and 15 minutes I lost a lot of blood,” Chandler said. “That blood that OBI placed on that helicopter actually saved my life.”

14 months after his accident, he started donating blood to help others who might also need blood.

He said it took a total of 23 pints of blood to keep him alive, showing that it takes a lot of people to donate to save just one life.

“To put it into perspective, every time we donate, we only donate a pint of blood,” Chandler said. “So it took 23 people, their time, their energy to sit down and donate blood that saved my life.”

Before his accident, he didn’t think much about donating blood, but now he devotes his time and energy to being one of those donors who save lives.

Even if he had to overcome a fear.

“Well, today will actually be my third time,” Chandler said. “So overcoming the needle problem is hard for me every time. I spent three or four weeks in the hospital, getting pricked and pushed, which helped me a bit. helped to be more comfortable with it.

Chandler said he believed he was saved for a reason, and that reason was to be the voice and example of OBI, leading people to realize that their donation could save a life in our community. .

If you want to join Chandler Becomes a Blood Donor, you can go to the Oklahoma Blood Institute website to learn more.

Life after death: Organ donation is part of the Greenwood man’s legacy