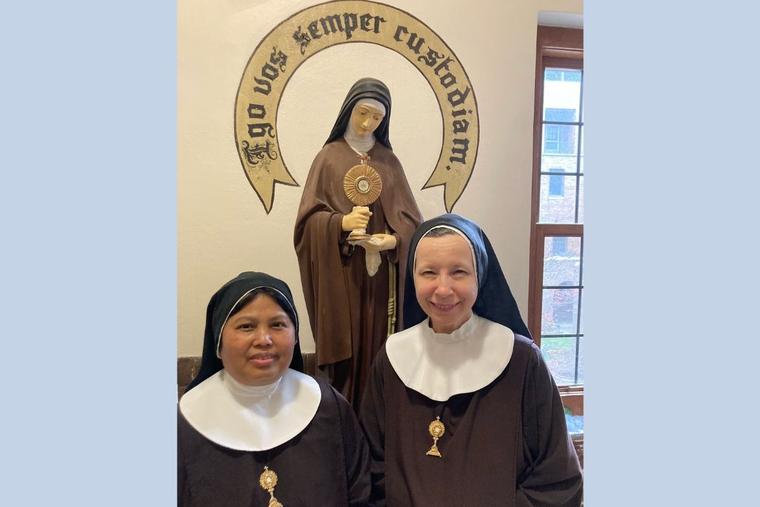 CLEVELAND – Before dawn on the morning of April 13, 2021, Sister Mary Joseph of the Most Precious Blood of Jesus left her Poor Clare monastery in Cleveland and reported to University Hospitals Medical Center for surgery. By choosing to donate a kidney to an anonymous stranger, Sister Mary Joseph demonstrated the “everyday heroism” described by Pope John Paul II in Evangelium Vitae.

“There is a daily heroism, made up of gestures of mutual aid, large or small, which build an authentic culture of life,” writes the saint. “A particularly commendable example of such gestures is the donation of organs, carried out in an ethically acceptable manner, with a view to offering a chance of health and even of life even to patients who sometimes have no other hope.”

According to the Health Resources & Services Administration (HRSA), an agency of the US Department of Health and Human Services, every day 17 Americans waiting for organ transplants die. More than 106,000 desperate patients are waiting for healthy lungs, livers and other organs. The greatest demand is for the kidneys.

Sister Mary Joseph was already a registered nurse in 1995 when she entered the Monastery of Adoration in Cleveland, the same monastery where Mother Angelica, founder of the Eternal Word Television Network, began her religious vocation. Sister Mary Joseph embraced the mission of penance and perpetual adoration of the Blessed Sacrament of the Poor Clares. Later, while serving as a community nurse, she witnessed firsthand the need for organ donation.

Sister Hyacinth of the Immaculate Heart of Mary is the youngest of the monastery’s 15 nuns. Born in 1980, she joined the Poor Clares in her native Bangladesh and came to the United States in 2003. The Poor Clares rarely venture outside their monastery except for medical appointments, but several years ago Sister Jacinta attended the ceremony that made her an American citizen. .

At some point in 2019, she started feeling tired, weak, and always cold. In November, her blood pressure skyrocketed and she woke up struggling to breathe. Hospitalized for 10 days, she underwent multiple tests and learned that she had Berger’s disease, an autoimmune kidney disease. Thereafter, she saw a nephrologist, a kidney disease specialist, monthly. He sent a nurse to the monastery in the summer of 2020 to discuss the different types of dialysis. Sister Jacinta had put herself on a waiting list to receive a kidney from a deceased donor. The nurse informed the nuns that Sister Jacinta would receive a transplant sooner if she could find a suitable living donor. Neither of Sister Jacinta’s parents lived in the United States, so they could not be tested as possible matches. Sister Mary Joseph quickly volunteered.

“I would do it for a biological sister,” Sister Mary Joseph said. “Well, we’re sisters in Christ.”

Her blood type was incompatible with Sister Jacinta’s, but because University Hospitals Cleveland Medical Center partners with a matching donation program called The National Kidney Registry (NKR), she could donate a kidney to a stranger instead.

“NKR takes this concept one step further by offering the Advanced Donation Program,” said Peggy Schuster, Living Donor Coordinator at University Hospitals Cleveland Medical Center. “This program allows a living kidney donor to donate before the intended recipient is ready for the transplant. When the recipient is ready to receive a kidney transplant, they are activated in the NKR program and matched with a living donor somewhere in the United States.

Sister Mary Joseph has begun her application process, which includes numerous medical tests and blood draws. In addition, she took a virtual class for donors. The mandatory meetings with a social worker and with a patient advocate helped her understand all aspects of organ donation and confirmed that she had freely made the decision to donate. These measures are consistent with the Church’s insistence that living donors should understand and accept the risks involved and choose organ donation of their own free will. The Church condemns the buying or selling of organs. In addition, donors must be able to continue a healthy life after the transplant. In the case of Sister Mary Joseph, she would live a normal life with only one kidney.

As the Catechism of the Catholic Church explains, “Organ transplants conform to the moral law if the physical and psychological dangers and risks for the donor are proportionate to the good sought for the recipient” (2296).

The “Ethical and Religious Guidelines for Catholic Health Servicespublished by the United States Conference of Catholic Bishops agree: “Organ transplantation from living donors is morally permissible when such donation will not sacrifice or seriously impair any essential bodily function and the benefit expected for the recipient is proportionate to the harm caused to the donor. Moreover, the freedom of the potential donor must be respected and the economic benefits must not accrue to the donor.

As of December 2020, Sister Jacinta was in the end stage of kidney failure. Still exhausted, she fainted while helping to decorate the cloister for Christmas. That winter, a Poor Clare was hospitalized with COVID-19, and Sister Jacinta and eight other sisters contracted the virus. She was taken off the transplant waiting list until a few months of consecutive negative tests proved she had recovered. Sister Mary Joseph, the primary caregiver for the sick sisters, has repeatedly tested negative for COVID-19.

During this time, Sister Jacinta became extremely anemic and she retained water. Sister Mary Joseph took her for three-hour dialysis treatments three times a week. Because the other nuns depended on her, Sister Mary Joseph also scheduled many of their medical appointments before her transplant. She knew she couldn’t accompany them during her convalescence.

At this time, Sister Mary Joseph also made another important decision: organ recipients only know the identity of their donor if both parties want it. Sister Mary Joseph has chosen to remain anonymous. His duties occupy him so much that a continuous correspondence would be difficult.

“And then, if something was wrong, I would feel so bad,” said Sister Mary Joseph. “I thought, ‘better leave it in God’s hands.'”

To date, she does not know the age, sex or any other details about the recipient of the kidney.

“But it was so nice when a nurse told me I was fine after getting my kidney,” Sister Mary Joseph said of the April 2021 surgeries.

She left the hospital four days later to continue her recovery at the monastery.

On June 2, 2021, Sister Jacinta received a kidney from an out-of-state donor and she returned to the monastery after five days in the hospital.

Doctors estimate that the new kidney will serve Sister Jacinta for about 20 years. She will need anti-rejection medication for the rest of her life. She continues to pray for the donor who, like Sister Mary Joseph, chose to remain anonymous. If she could speak to that person, Sister Jacinta’s message would be, “I’m so grateful! I’m doing well.”

Months after their respective surgeries, the sisters resumed their roles within the cloister. Both are looking forward to the monastery’s belated 100th anniversary celebration, which had to be postponed due to a local rise in COVID cases. The fundraising gala is now scheduled for Sunday, April 24, with Cleveland Browns coach Kevin Stefanski as the keynote speaker.

To Catholics considering becoming a living donor, Sister Jacinta said, “It’s the greatest gift he or she gives a person: it’s giving that person another chance.

For her part, Sister Mary Joseph always prays for the stranger who received her kidney. She admitted that it took her time to rebuild her strength after the operation.

“It’s a major operation,” she said. “It’s not something to be taken lightly. But it’s worth the step I took. It is a wonderful opportunity to extend the gift of life.

Moral theologians have also weighed in on living donors.

“Although all magisterial theologians agree that organ donation and living donor transplants are morally justified and are indeed noble and good actions as long as certain criteria are met, they differ however in the reasoning that they use to show it,” explained William E. May in “The morality of organ transplants.”

“The most common position was developed by Jesuit Father Gerald Kelly, the most important moral theologian of the 1940s to 1950s. This view holds that such donation and transplantation is justified by the principle of charity or brotherly love when they are of great benefit to the recipient, provided that the harm suffered by the donor is limited and morally acceptable.

May continued, “Germain Grisez and others believe that living organ transplants can be justified by the principle of double effect. According to this principle, an action, having two effects, one good, the other bad, is morally good provided that the action is not morally reprehensible for other reasons, that the evil is not intentional, that evil is not the means to good, and that there is a “proportionate reason” for tolerating or accepting the evil effect.

“The morality of self-giving of vital organs depends on how the doer relates, in his freely chosen act, to the great goods of healthy functioning and of life itself. If the harm (including mutilation) suffered by the donor — but in no way desired by him or by those involved in the transplant — does not affect his functional integrity, the harm suffered is an involuntary side effect of an act of self-sacrifice, a morally good act. However, if the donor’s functional integrity and hence his own health and life were to be impaired, it would be wrong for him to choose to donate because the means he would choose, endangering his own health and one’s own life, is evil though destined for a good end, but one can never intend or choose evil for good to come.

Organ donation is a gift of life