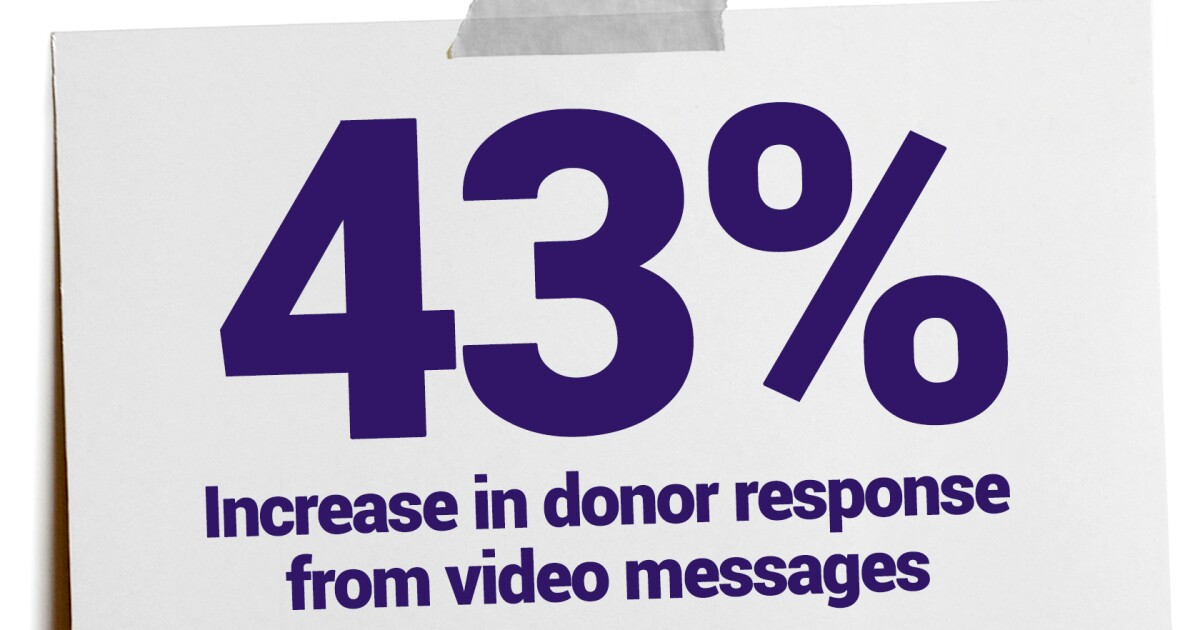 The pandemic has made it especially important for nonprofits to improve how they use technology — especially video — to connect with donors, according to new research from Indiana University Lilly Family School of Philanthropy. .

The research is part of a series of studies funded by the Bill & Melinda Gates Foundation that aims to explore the underlying causes of the steady decline in the share of Americans who give to charity.

One of the studies in question 16 focus groups this included a total of 83 fundraisers, donors and people who are members of organizations like the YMCA but don’t donate to explore how people make charitable giving decisions. “People transferred their giving to organizations that demonstrated impact and effectiveness, actively engaged in communication and education, and personalized donor engagement,” the study says. , “Understanding How Donors Make Giving Decisions”.

Given that many people are still hesitant to hold face-to-face events and meetings, improving the use of technology to connect with donors can be particularly important, said Una Osili, associate dean for the research and international programs at the Lilly School.

“For fundraisers, involvement is thinking about how you can connect the donor to the cause and involve them in the work and the mission,” Osili said. “Video can connect in ways that a written message may not.”

Focus group fundraisers also expressed a desire for their organizations to invest in technologies beyond video that can boost and personalize donor outreach. For example, some fundraisers have said they are interested in or are already experimenting with “geofencing,” in which software uses GPS or cellular data to trigger certain actions, such as an email solicitation, when a device mobile enters a specified geographical area.

Since the pandemic began, people have become more interested in giving locally, Osili said, and technologies like geofencing can help nonprofits connect with those donors.

“The shift to virtual interactions and the need to use more digital technologies was presented as inevitable but challenging,” the Lilly report said.

A closer look at the video

The other Lily to study“Understanding Drivers for Donor Engagement”, involved 1,545 American adults and explored the impact of video versus email messages, using as a case study a nonprofit organization that provides emotional support to hospitalized children for serious illnesses.

A group of research subjects saw a video of the nonprofit organization doing its work. Another group of subjects received a fundraising email describing the injustice of a seriously ill child and the difficulties of the family. A control group read a short, simple description of the work done by the nonprofit. Participants were then asked to sign up for an email newsletter or contribute $5 to the nonprofit.

The video increased the likelihood of beneficiaries connecting with the nonprofit by 43% compared to the control group. The video was effective both for people who had never heard of the nonprofit before and for those who had not donated to a nonprofit in the past year. .

Those who received the emails were also more likely to connect with the nonprofit group than the control group, but the difference was within the study’s margin of error.

Mark Ottoni-Wilhelm, professor of philanthropic studies at Lilly School, said the study suggests it’s important for fundraising messages to connect with donor empathy and show the impact of giving in a specific way, but without making people feel stressed or guilty.

This study had a margin of error of four percentage points.

Stations see cryptocurrency as a new option for donors